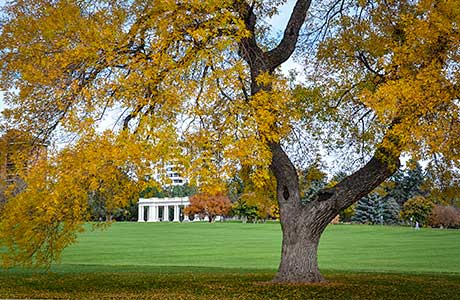 The Cheesman Park neighborhood, comprised of the blocks around the park, is one of the oldest and loveliest areas in Denver, featuring stately homes, old-growth trees, and plenty of green space. Central is the park itself, 80 acres of land with nearly two thousand trees. Next to the park is the Denver Botanic Gardens, which offers 24 acres of diverse gardens, summer concerts, as well as community classes and gatherings.

Community is important in Cheesman, whether it’s the regular cadre of dog-lovers out in the park or the locals gathering down at the landmark Pete’s Kitchen, which has been a neighborhood staple since 1942. Just north of the park is a different kind of community, the Lighthouse Writers. The largest literary arts center in the Rocky Mountain West, the Lighthouse offers community workshops and brings national recognized writers to Denver. During the day, locals can be found at the many coffee shops embedded in this neighborhood. At night, Colfax Avenue lights up to the sounds of music from The Ogden and The Fillmore theatres, two of Denver’s most iconic music venues.

Cheesman is less than ten minutes from downtown (only fifteen on a bike), meaning you’re within a short distance to world-class restaurants, Broadway musicals at the Performing Arts Center, eating a Rocky dog at Coors Field, riding the Mind Eraser at Elitch Gardens, or outdoor concerts at Civic Center Park. All of the big city amenities, way less traffic. And with a combination of public transit, bike lanes, and ride shares, you might just ditch your car entirely. With this much great stuff close by, you won’t even need it.

Why Choose Our Realtor Services

- The Snyder Realty Team has extensive knowledge of the classic Denver neighborhoods, specifically the Cheesman Park neighborhood and Congress Park neighborhood. So whether you're looking for homes for sale in the Denver area or the time has come for you to sell, you’ve come to the right place.

- It is the Snyder Realty Team's goal to provide you the highest level of experience and professionalism. Feel free to check out the testimonial section of our website to see what others have said about us.

- Every buyer or seller has their own unique needs and expectations. Our goal is to always exceed those expectations and make the entire process as smooth and enjoyable as possible.